Zojoji was founded in 1393 as an orthodox and fundamental nembutsu seminary for Jodo shu in the Kanto (east Japan) region.

Zojoji was relocated to the present site in 1598 after Ieyasu Tokugawa, founder of the Tokugawa shogunate, entered Edo (present-day Tokyo) in 1590 to establish his provincial government. After the start of the Edo Period when the Tokugawa shogunate ruled Japan, Zojoji became the family temple of the Tokugawa family and an unparalleled grand cathedral was built. Zojoji also served as an administrative center to govern the religious studies and activities of Jodo shu. In those days, its precincts covered an area of 826,000 square meters which also contained 48 smaller attached temples and about 150 grammar schools. Moreover, as many as 3,000 priests and novices always resided here as students.

Nevertheless, as the Tokugawa shogunate came to an end and the Meiji Era started, an anti-Buddhist movement got under way. The cathedral, temples and the mausoleum of the Tokugawa family were burned down by air raids during World War II. Thus, Zojoji was profoundly affected by political and social circumstances.
Today, however, its cathedral and other structures have been rebuilt, and Zojoji continues to serve as the main temple of Jodo shu and the central nembutsu seminary for priests and novices. Furthermore, it has endeared itself to the general public as both a grand Buddhist temple typical of the metropolis Tokyo and a hub of religious and cultural activities. 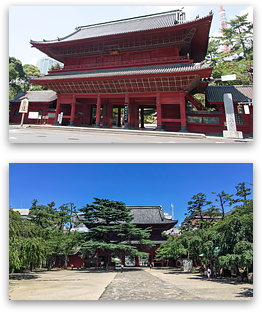 You are standing at the Sanmon, the main gate of Zojoji Temple. In Jodo Pure Land Buddhism, anyone passing through this gate is cleansed of the three worldly afflictions of greed, anger, and ignorance. This gate was actually the inner gate. You can see the original main gate if you look directly back down the street behind you.

Formally called the Sangedatsumon, it was built in 1622 by the chief carpenter to the shogun and is the only remaining original temple building. It is one of the oldest wooden structures in Tokyo and is an Important Cultural Property.

The elaborate construction style, with a ridged, hip-and-gable roof above a lower pent roof on the four sides of the lower part, was introduced from China around the sixth century, around the same time Buddhism arrived in Japan. The simpler design of the balustrade reflects a more Japanese style. The bright vermillion lacquered exterior was one of the most famous landmarks in Edo (now Tokyo).

The second floor, which is closed to the public, enshrines a statue of Shakyamuni, the historical Buddha, flanked by two bodhisattvas and 16 arhats, the most dedicated of Buddha’s disciples, all dating from the Edo period (1603–1867). Visitors may note the lack of the two Nio guardian statues, whose fierce visages frighten off the unworthy, that are usually found at the entrance of a Buddhist temple. This is because the Jodo (Pure Land) Buddhism practiced at Zojoji was founded to spread Buddhism to the masses. Salvation is thought to be attainable by anyone who chants the words, “Namu Amida Butsu” (I take refuge in Amida)—a practice known as nenbutsu.

A ten-year restoration project of the gate is scheduled to begin in April 2025. 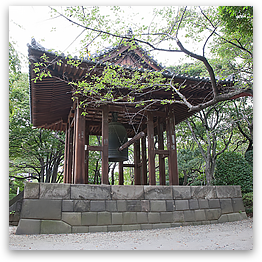 This bell was completed in 1673 after repeating casting work as many as seven times. This giant bell, boasting a diameter of 1.76 meters, a height of 3.33 meters and a weight of 15 tons, is renowned as one of the Big Three Bells of the Edo Period.

The bell is tolled twice a day - six times each in the early morning and in the evening. It not only chimes the hours, but also serves to purify one hundred and eight earthly passions (bonno), which lead people astray, through an exhortation, repeated six times a day, to profound equanimity. 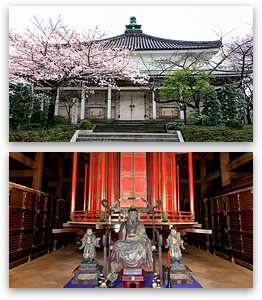 Kyozo was built in 1613 with the financial aid of Ieyasu Tokugawa and drastically remodeled and relocated in 1800. This Japanese- storehouse has octagonal-shaped revolving bookshelves at its center. It has been designated as cultural property by the Tokyo Metropolitan Government.

Formerly stored in this godown was Sandaizokyo (tripitake), the three principal collections of the Buddhist canon (daizokyo)- So-ban and Gen-ban (printed in China during the Sung and Yuan eras, respectively, and Korai-ban, printed in Korea) - which were donated by Ieyasu Tokugawa. They have been designated by the State as important cultural property. (Nowadays, they are kept in a storehouse, situated behind Kyozo.) 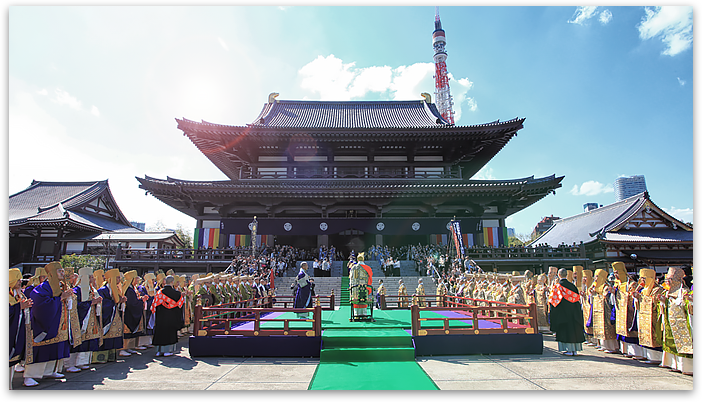 Daiden (Hondo), which forms the core of the Buddhist structures of Zojoji, was rebuilt in 1974 by combining the traditional Buddhist temple architecture with a cream of modern architecture. Enshrined in this hall is a large main image (honzon) of Amida Buddha (made during the Muromachi Period), with an image of Great Teacher Shan-tao (who perfected China's Jodo (Pure Land) Buddhism) at its right and an image of Honen Shonin (who founded Japan's Jodo Shu) at its left. These images are deeply revered by many people who worship at Zojoji. Daiden has been reconstructed according to an innovative architectural design that enables it to serve not only as a fundamental nembutsu seminary of the headquarters of Jodo shu, but also as a site for all manner of religious rites and memorial services. 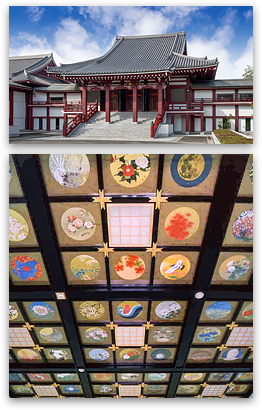 Koshoden has been completed as a lecture hall and seminary for “cleansing soul and fostering the vigor to live” with the advent of the 21st century.

The coffered ceiling of its large hall features pictures of flowering plants, donated by 120 pious Japanese artists and fitted into coffers. This gorgeous display of ceiling pictures is bound to be appreciated as an artistic heritage for the 21st century, helping to fill the hearts of people gathering in the hall with unfathomable piety and bliss. 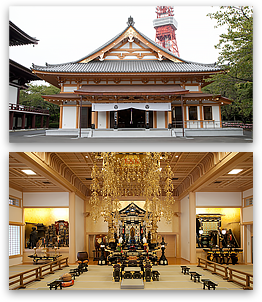 Enshrined in this building is the Black Image of Amida Buddha, which was deeply worshiped by Ieyasu Tokugawa.

This wonder-working image is said to have repeatedly saved Ieyasu from dangers and enabled him to win battles. Since the Edo Period, it has been widely revered as a Buddhist image which brings victory and wards off evils. 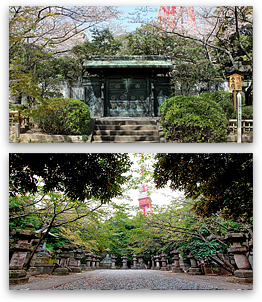 After Ieyasu Tokugawa started to rule the Kanto (east Japan) region, he accorded cordial protection to Zojoji as the family temple of the Tokugawa family. Parallel to the expansion of the Edo Castle, a large-scale construction project was also commenced for Zojoji. After that, Zojoji came to be widely known as one of Japan's principal Buddhist temples. Located in its precincts are the tombs of six Tokugawa Shoguns, Imperial Princess Kazunomiya (wife of Shogun Iemochi), and wives and children of shoguns. Nowadays, these tombs serve as a reminder of the prosperous Edo Period.

The first basement floor of the Daiden (Great Hall) houses the Treasures Gallery, an exhibition space completed in 2015. The centerpiece of the gallery is the extraordinarily detailed 1:10 scale model of the Taitokuin Mausoleum, the original burial site of second shogun Tokugawa Hidetada (1579–1632). The mausoleum, along with many of Zojoji Temple’s other structures, was destroyed in the 1945 air raids. 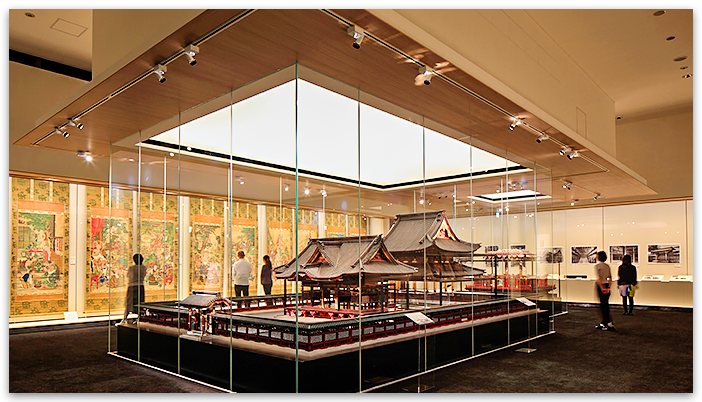 The centerpiece of the Treasures Gallery is the 1:10 scale architectural model of the Taitokuin Mausoleum, the original burial site of the second Tokugawa shogun, Hidetada (1579–1632) whose posthumous Buddhist name was Taitokuin. The mausoleum was built in 1632 by his son Iemitsu (1604–1651), and its elaborate architecture and magnificent decoration are thought to be a prototype for the Toshogu Shrine in Nikko, which Iemitsu later had built by the same craftsmen to enshrine Ieyasu, the first Tokugawa shogun. Sadly, the Taitokuin mausoleum, along with most of Zojoji Temple, was left in ruins by the 1945 air raids.

This detailed model was commissioned by the city of Tokyo and built by a team of 150 carpenters and artisans to showcase Japanese culture and technology at the 1910 Japan-British Exhibition held at White City, London. The event was a huge success, with over eight million visitors over five months. After the exhibition, the model was presented to King George V and displayed at the Royal Botanic Gardens in Kew, before being dismantled and stored as part of the Royal Collection.

The model remained there until it was rediscovered with the help of scholar William H. Coaldrake, and returned to Zojoji on loan for public display. An exhibition space was created in the basement of the Daiden Great Hall and, after months of careful restoration, the model went on display in 2015.

Some 4 meters wide and 6 meters long, the model consists of the Main Hall and Worship Hall joined by a connecting hall, all surrounded by a fence with an inner gate. The roof of the Main Hall is shown in a separate case to allow an unobstructed view of the decoration of the interior as well as the details of its construction. Coaldrake observed at the time that “[this is] not only a model of a once-great building, it [is] also a work of sublime artistic accomplishment in its own right, exemplifying the highest technical and aesthetic standards of Japanese traditional craftsmanship.”

A selection from a remarkable collection of 100 scrolls by the late Edo period painter Kano Kazunobu (1816–1863) is displayed on a rotating schedule at the temple’s Treasures Gallery. Kazunobu was a devoted Buddhist renowned for his religious paintings. In 1854 he was commissioned by a priest from Genkoin Temple, one of Zojoji’s subsidiary temples, to create paintings of the daily lives of 500 arhats, the most accomplished and dedicated of the historical Buddha’s disciples.

The complete series, Five Hundred Arhats, depicts worldly desires and ways to overcome them. Some scrolls are intimate scenes of the arhat’s private lives, showing them bathing, studying, or shaving. Others show them with strange “sacred beasts,” or floating over horrific scenes depicting the hellish fates awaiting those who lack piety—floods, earthquakes, molten pools, and freezing ponds. Kazunobu was a member of the Kano school of painting. This school merged the ink and brushwork of Chinese painting with the more colorful, decorative patterns of Japanese art. Its use of light and shade hints of chiaroscuro. His unconventional eccentricity and dynamism is similar to that of other Edo-period masters, such as the woodblock artists Hokusai (1760–1849) and Kuniyoshi (1798–1861).

Kazunobu spent ten years working almost exclusively on the scrolls. He died after finishing the 96th scroll, when he was 48 years old. The final four were completed by one of his students under the direction of his wife, and the collection was dedicated to Zojoji in 1863. A hall to exhibit the scrolls was built just inside the Sanmon Gate in 1878, but it was destroyed in the 1945 air raids. Fortunately, the scrolls survived, possibly because they were stored in the sutra repository, which was not damaged in the war.

Ten scrolls, each measuring 172 centimeters by 85 centimeters, from the set are displayed in the Treasures Gallery and changed every three to four months. 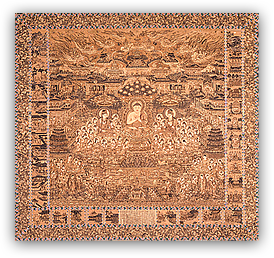 Buddhism and Development of Jodo shu

Jodo shu preaches Senju Nembutsu (the single-minded recitation of the Nembutsu). That is, by reciting the Nembutsu prayer Namu-Amida-Butsu, all people can be equally accorded salvation thanks to Amida Buddha's benevolence that is meted out to all people without discrimination, enabling them to be reborn in Gokuraku-jodo (Pure Land of Bliss) after their death. 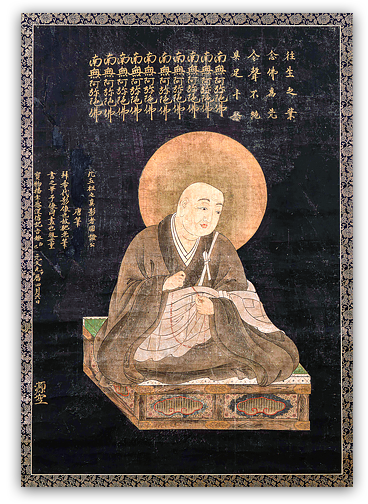 Jodo shu was founded by Honen Shonin (1133~1212) in 1175, based on Jodo-kyo, which had been developed by Great Teacher Shan-tao. The purpose was to propagate Buddhism, until then restricted mainly to the State and the nobility, in order to bring equal salvation to all people.

Jodo shu preaches Senju Nembutsu (the single-minded recitation of the Nembutsu). That is, by reciting the Nembutsu prayer Namu-Amida-Butsu, all people can be equally accorded salvation thanks to Amida Buddha's benevolence that is meted out to all people without discrimination, enabling them to be reborn in Gokuraku-jodo (Pure Land of Bliss) after their death.

ZOJOJI the chief temple of the Jodo-Buddist sect.